Which Viking 30″ Gas Range Should You Buy? – Review

Viking now has three different 30″ gas ranges to choose from, all available in assortment of colors with varying price points. The following Viking range review will break them down and also show their ability to be featured pieces in Viking kitchen packages.

Around 10 years ago Viking released a line called D3 that would be more contemporary looking and be de-featured from their standard lone of pro ranges so they could be delivered at a lower price point. 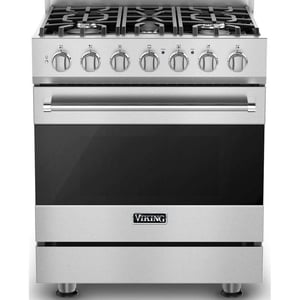 Through the years the D3 stove was constantly tweaked until it became the Viking 3 Series, the current iteration of the line. Only available in a 30″ size, but with a variety of color options as well as being available in gas , dual fuel or electric. Some of the ranges features include:

If you or a friend has purchased a Viking gas range between the late 90’s and early 2000’s, odds are that it is an open burner model.

This was the Viking gas range that set off the explosion in commercial, high end kitchens that continues to this day. 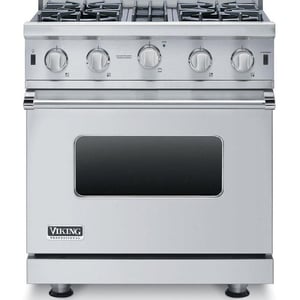 One significant benefit of purchasing this range is that you can take advantage of the Viking promo which gives you a free Viking diishwasher or microwave, which has a value of up to $1799.

If you are looking for the rugged, commercial look that Viking is known for, as well as next level cooking performance, the ability to customize in colors, then look no further than the Viking 5-series, 30″ sealed burner range . The VGR5304BSS is the best selling range in the entire Viking lineup as it offers everything Viking has become famous for over the years, while adding new wrinkles that separate it from it’s open burner and 3-series cousins. The Viking VGR5304BSS gas range sells for $5189 and also makes you eligible for the free Viking dishwasher ($1599) value.